The Cathedral (大聖堂 or 大神殿) is a huge building in Adventurer Cities where players who are killed in Elder Tale revive.

After the Catastrophe, players are unsure whether this revival feature still works. However, it is soon determined that players who are killed in Elder Tale still revive at the Cathedral, just as they did before the Catastrophe. Thus, even in-game death does not allow players to exit from the game. This discovery also leads to a rise in Player Killing.[1] When entering any location with a Cathedral, Adventurers are instantly bound to that Cathedral and will revive there unless they come upon another Cathedral or Shrine.

In Minami, Nureha managed to buy the Cathedral and thus had power over the lives of any player who dies with Minami, as his or her revival point was under her control. It is known that those players will not revive (or at least, not at that Cathedral), but it is unknown what happens to them besides that.

Shrines serve the same purpose as a Cathedral, although they are not located in Adventurer Cities. They can be found from Earthling cities to the wilderness, making it both useful and highly dangerous depending on the situation an Adventurer is in.

There is also a certain type of shrine that can act as portable Cathedrals; for example, the Odysseia Knights, a suicide cult branch of Plant Hwyaden, somehow came to possess the Portable Shrine of Boreas. Touya's Party, along with Roe2 and Dariella, came across the shrine along with them as they carried it in their hunt for monsters. When any Adventurer who comes in contact with it dies, they respawn at this Shrine. The Odysseia Knights use this to perpetually enter battle, killing monsters while killing themselves, then respawning at the Shrine and continuing the fight.

Raid areas have designated Safe Zones where players revive when they are killed. This is a system that was in Elder Tale so players could continue raiding without the trouble of reviving on a Cathedral far away from the Raid Area.

In the case of the Akiba Raid and the Akiba Guild Hall Raid, Akiba's Cathedral doubled up as their Raid Safe Zone.

Entryway to the Cathedral 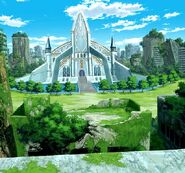 A background used in the mobile game featuring Akiba's Cathedral

The exterior of the Cathedral in the Settings Book 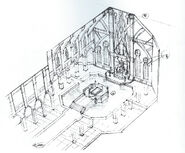 The interior of the Cathedral in the Settings Book

Retrieved from "https://log-horizon.fandom.com/wiki/Cathedral?oldid=30739"
Community content is available under CC-BY-SA unless otherwise noted.