Contract is the twentieth episode of the Log Horizon anime. It covers Game's End, Part 2 chapter 5.

Shiroe ponders over the importance of Minori's plea for help: she is a hard worker who would rather do things herself than ask for help, which must mean she is now desperate. Over the call, she discloses Rudy's situation, including the fact he is an NPC.

Shiroe and Akatsuki leave the command center under Charasin to attend Minori's plea, flying to Choushi on his griffin. Recollecting what he learned from Li Gan, Shiroe instructs the trainees to keep applying resurrection and MP restoration magic on Rudy until he arrives. He theorizes that the connection between Rudy's mind and body still requires mending in order to halt his decay. He reminisces Kanami having confidence in him before remembering about World-class magic, to which he lets Akatsuki take the reins while he gathers materials from his inventory.

Takayama Misa and Rayneshia report to Krusty, informing him of the current battlefield after having decimated the majority of the goblins with his forces. He prepares himself to confront their general, whose Dire Wolves are howling in the distance.

Shiroe finishes his product just as Minori calls to report the Ocypete already engaging the Sahuagin that prevent the docking, forcing the reinforcements to resort to rowboating to the shore. Upon arriving in town, he orders Akatsuki to maintain the perimeter from monsters and adventurers. He finds Minori and the others, but first demands their non-disclosure of the new spell he will use, to which they all comply with silence. Shiroe uses「Mana Channeling」to redistribute the party's MP to decent levels, including Rudy, and uses Revival Incense to temporarily reconnect his mind and body for consciousness. Rudy wakes up to realize he has died, and tells the party not to worry because the risk of death is only a natural part of fighting as an adventurer. He tells them to forgive Isuzu for keeping his secret, but Minori reveals that she has also known.

Shiroe disagrees with Rudy's content with death, such resolve was shallow to a true adventurer. He notes that the training was more than battle knowledge, but for finding a will to live, fight, and win; without the spirit to refuse defeat, he was far from an adventurer. Rudy asks what he needs to do, to which Shiroe presents a contract. 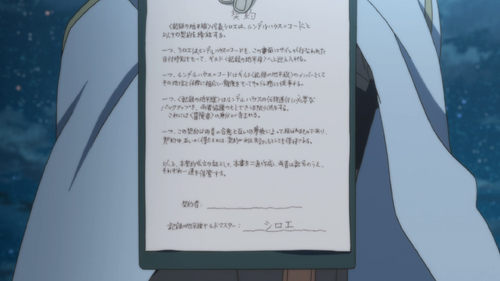 Using phantasmal-level materials, Shiroe applied the principals of manual preparation to draft an effective Magic Contract that could change the laws of the world. In this case, he would grant Rudy an Adventurer status in order for him to respawn. He gives the contract for Rudy to sign, and caveats that adventurers are still an unknown phenomenon to the world, and might not be as glorious as one would imagine. Rudy accepts the risk, stating that as an Adventurer, he only wants to help people in need. With the help of Isuzu, he writes his name into the contract, and is then engulfed in a brilliant light as he is revived at the Cathedral in Akiba.

On Krusty's side, his army confronts the Goblin General's army of Dire Wolves in a ravine. They apply heavy artillery to the wolves, after which Krusty leaps in to slay the general in a fell swoop, putting an end to the Goblin advance.

With the Sahuagin defeated, Marielle lounges in the sand, with Naotsugu gently fanning them both. She asks him if they did the right thing, to which he agrees that what they did had saved the town in the end.

Minori asks Shiroe why he said those things to Rudy, he replies that the term "Adventurer" in this world is now different than the game. To him, it refers to those that trek across the world in search of a sunrise no one has seen before.

At the Cathedral, Rudy discovers his new "Adventurer" subclass that includes the innate privileges of adventurers. Isuzu enters the building and reprimands his reckless action, making him promise to never do such a thing again. She then demands he expose about his life to her as reconciliation.

Retrieved from "https://log-horizon.fandom.com/wiki/Contract?oldid=29274"
Community content is available under CC-BY-SA unless otherwise noted.