The Depths of Palm

The Depths of Palm

The Depths of Palm is a dungeon in Eastal territory, located in the Tearstone Mountains.

The Depths of Palm is the halfway point between Akiba and Susukino. Situated at the base of the Tearstone Mountains, the dungeon is a complex maze of ancient tunnels and mine shafts. The dungeon serves as the house of demi-human monsters called Rat-Men, known for their ability to cause the Plague status. After the Homesteading the Noosphere expansion, a level 68 monster called Rat-Maso was added to the dungeon as its boss. Due to its presence, the ancient walkways inside the dungeon had crumbled and became dangerous to explore.

It is later discovered that at the deepest levels of the dungeon, in the Abyssal Shaft, there are gigantic pools of gold, which is the source of all the gold in the Yamato server that are dropped by monsters. It is also here where the gold goes back to after being used by both People of the Earth and Adventurers, through the use of ancient Alv technology. It is under the supervision of the Kunie Clan, a special group of Earthlings that are in charge of monitoring and maintaining the ancient Alv technology that was left behind, including the Royal Guard system under each city and the bank system of the entire Yamato server.

The Depths of Palm is the lair of the Demi-Human monster Rat-Man. 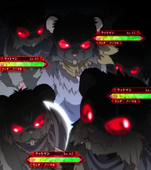