Genjirou (ゲンジロウ) is a male Wolf Fang Samurai who was first used as a demo character for the Log Horizon TRPG Rulebook. Like the other characters created as demonstrations for the TRPG, he initially did not have a name until an event was held for the mobile game to give them names.

Along with the rest of the TRPG demonstration characters, he is a member of the guild Quickstars. 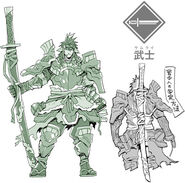 Design sketches by Hara Kazuhiro
Add a photo to this gallery

Retrieved from "https://log-horizon.fandom.com/wiki/Genjirou?oldid=28965"
Community content is available under CC-BY-SA unless otherwise noted.