The Beginning of Another World

The guild center (ギルド会館, girudo kaikan?, also referred to as the Guild Meeting Hall) is a large, sixteen-floor[1] multi-purpose structure in Adventurer Cities.

This is where players can establish guilds, join or leave one, use the banking facilities, or rent out guildhalls.[2]

The center's entry hall holds the registration desk used for joining or withdrawing from a guild. This desk is staffed by People of the Earth who perform clerical work. Also located inside the building is a bank branch, which players can use to store gold and valuables.[2]. Once something is deposited, it can also be withdrawn at a branch in another city.

Higher floors are accessible via stairs. The second through fifteenth floors hold guildhalls, which can be "purchased" (really rented) at the registration desk. The sixteenth floor, the topmost floor, is a conference room.

While the main halls and the conference room of the guild center is all considered the same zone, each guildhall is a separate zone. The number of rooms in a guildhall depends on its rank; there are four ranks, which hold three, seven, fifteen, or thirty-one rooms, respectively.[3] Guildhalls can be decorated and refurbished to fit the members' tastes.[2]

Like all purchasable zones, the zone's owner can change its settings to allow or deny entry or exiting for other players, allow or disallow fighting, etc. After purchasing the zone, a monthly maintenance fee equal to 1/500 of the original lump sum must be paid.[2]

After the Catastrophe, all buildings and zones were put up for sale, even the guild center—though it cost a hefty 5,000,000 Gold.

In Akiba, Shiroe purchased the guild center using Gold amassed from the Crescent Moon Refreshment Stand and the (unwitting) investments from Marine Organization, The Roderick Firm, and Shopping District 8. With this, he gained the power to blacklist any player or guild from entering or exiting the building, thus controlling their ability to access their bank accounts and use the center's facilities. He used this leverage at the Round Table Conference to prove to the other guilds that he had a method of enforcing his "rules" should they try to ignore them. Shiroe also uses his control over the guild center to deny access to Hamelin's members, eventually forcing them out of the city. After the establishment of the Round Table Alliance, its guild masters (or representatives, if the guild master is unavailable) meet in the conference room to discuss matters of importance.

In Minami, Nureha purchased the guild center and other important structures such as the Cathedral using money given to her by Holy Empire Westelande nobles, particularly the House of Saiguu. Like Shiroe, Nureha uses this leverage to compel adventurers in the city to do her bidding; however, she has all other guilds disband and join her Plant Hwyaden, assimilating the city into one mega-guild.

After purchasing the guild center and other important structures in Akiba, the monthly maintenance cost for the Round Table Alliance is a hefty 10,000,000 Gold. In order to relieve the pressure on their coffers, Shiroe and Naotsugu head for secret negotiations with Kinjo, the leader of the Kunie clan which maintains the server's banking facilities. However, because of each side's secrecy and subsequent misunderstandings, negotiations grind to a halt. Using one last hint from Kinjo, Shiroe goes to tackle the Abyssal Shaft raid—an unknown raid said to lead to the place where the Kunie control and distribute all the Gold in the server.

When Shiroe finally reaches Kinjo, he reveals what he was really after: Returning Akiba's major structures, as well as major zones that he believed nobody should have a right to possess, back to Yamato server itself using Magic Contracts. By transferring zone rights to "Yamato", this rendered the lands unpurchasable by any other player and prevented them from taking total control of an area. This also took Akiba's building maintenance fees off the Round Table's hands, relieving a major part of their financial burden. 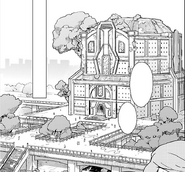