Hara Kazuhiro (ハラカズヒロ) is the illustrator of the Log Horizon light novels and the Log Horizon manga. In his free time, he plays games like Animal Crossing, Fate/Grand Order, and Neko Atsume, and seems to be a fan of the Sonic the Hedgehog franchise (as well as having worked for it).

He may have been a fan of Log Horizon during its early days as a web novel, before becoming officially published; around two months after the series made its debut on the web, he posted sketches on his Hatena Haiku blog with characters that closely resemble Shiroe and Akatsuki and Raynesia and Krusty. Mamare Touno may have found out about him because of this, and he was later hired as the light novel's illustrator. 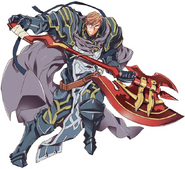 Hara's guest sketches at the Re:Fraction exhibit in May 2018
Community content is available under CC-BY-SA unless otherwise noted.
Advertisement