Keiji Fujiwara (S1-2)
Yohei Tadano (S3)[2]
Li Gan ("Regan" in the Crunchyroll translation of the anime, also spelled "ReGan") is a Sage of Miral Lake and a dedicated magic researcher. He first appears to discuss the world's magic laws with Shiroe, and later is invited by the enchanter to travel north to Susukino with him.

With his disheveled robes and enigmatic appearance, Li Gan sometimes appears to be a shady character. Tetora calls him a "skeleton," a name that he does not seem to particularly mind. Like all Elves, he has characteristically pointy ears.

Li Gan appears to be mysterious and enigmatic when he first introduce himself to Shiroe and Akatsuki. He holds great interest in studying the laws and mysteries of magic, and is excited by the meeting of three different kinds of scholars present (himself, an Adventurer, and a member of the Kunie clan). He is easily excited by the chance at gaining new knowledge, no matter how small. He has immense knowledge of the past of Theldesia and is even able to manipulate the technology of the Ancients.

While he is rather competent as a combatant in Earthling terms, enough to best a band of middling Earthling knights,[4] he is well aware how pitiful his abilities are compared to an adventurers', and has no problem in admitting that his place is not on the battlefield.

A mage of Miral Lake, his interest lies in magical research, especially World Class Magic. His knowledge is vast, as he is one of a few people who recognized that the entire world of Elder Tale had been altered by magic three times in its history. He named this phenomenon the "World Fraction." Even before the Catastrophe, he was among those that suspected that the Adventurers originated from a more technologically-advanced world.

Li Gan appears before Shiroe and Akatsuki through a portal at the balcony, though his entrance made them ready their weapons in self-defense. After properly introducing himself, he brings them back to his library to discuss the World Fraction and the Spirit Theory.

Return of the Goblin King arc

A month after the Return of the Goblin King event, Li Gan congratulates Shiroe on creating a new kind of magic. When asked how he knew about it, Li Gan admitted seeing the effects of the new magic during the Goblin conflict.

Li Gan accompanies Shiroe and Naotsugu on their initial round of negotiations with Kinjo, a member of the Kunie clan, to negotiate for a large amount of gold. His hopes for this historical moment are dashed when Kinjo promptly refuses Shiroe's request without much discussion.

He then continues with the two to Susukino, where Shiroe intended to request Silver Sword's cooperation in overcoming a new Raid quest. During this time, Naotsugu and Li Gan wander Susukino in hopes of finding another possible party member. They stumble upon Tetora, who had fallen in the snow, and Li Gan reveals his liking for panties. He casually mocks Tetora's Idol act, much to her displeasure.

Although Li Gan helps open the gates for the Abyssal Shaft, he stays behind as he is a non-combatant. After Shiroe and Naotsugu finish their mission, Li Gan decides to stay in Susukino to finish up his research on the Transport Gates.

Months later, Li Gan returns to Akiba to share his findings with Shiroe. He discovered that the Transport Gates require large amounts of mana to run and are related with the lunar cycle. At some point around the Catastrophe, the supply of that mana was somehow cut off, rendering them nonoperational.

Shiroe speculated that there might be ancient Alv ruins on the moon and while Li Gan could not confirm this, he speaks of legends about Alvs having once resided on the moon in ancient times. While discussing methods to establish communications with the Travelers based there, Li Gan suggests going to the NHK Communications Tower in Shibuya.

Before they solidified their plan, a crisis occurs: hundreds of thousands of Moonlight Moths began attacking Adventurer Cities, draining their MP and rendering Adventurers and Earthlings alike comatose. Further complicating issues, the entirety of Shibuya was transformed into a dungeon raid zone, with an unknown boss situated right on the NHK Tower.

Shiroe formed the Shibuya Raid Team to rescue their communication to the moon, and Li Gan tagged along to unlock the seal to the dungeon and record this unprecedented event. Despite being the weakest member on the team and requiring heavy protection, he was able to hold his own by casting defensive shields.

After defeating the Genius Taliktan and reaching their goal, Li Gan sets up the device to communicate with the moon. Instead of the moon, they reach Kanami's Party, who themselves had vanquished Youren (the Genius Papus) and reached a similar communications device. After a brief conversation, the connection begins to drop... so Kanami tries fixing it by using Tiger Echo Kick, which instead destroys her device and cuts off the link. Li Gan is left to shake his head at this turn of events.[5]

Collapse of the Round Table arc

To understand the full significance of Eins' claim on the title of Akiba Duke and the House of Saiguu that he has ties with, Shiroe and Akatsuki consult Li Gan. He gives them a detailed account of the Westelande Dynasty and how Eastal and Westelande of the present came to be.

Thanks to Li Gan's research on the Transport Gates, Shiroe, to back Raynesia's faction, restarts Akiba's Transport Gate as a display of power and authority during the vote between her and Eins.

In the mobile game Log Horizon: New Adventure Land, Li Gan appears when you visit the Archives, where you can read past scenarios and check details for characters, weapons, and accessories. So far, he has not yet received a playable version.

The unnamed headpiece he wears grants him insight and memory retention beyond normal capabilities, and is an item handed down upon Sages of Miral Lake. 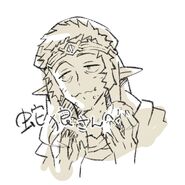