Log Horizon 6: Lost Child of the Dawn is the sixth volume of the Log Horizon light novel series. This volume focuses on Akatsuki and the Akiba Raid Party, and takes place concurrently with The Gold of the Kunie, which focuses on Shiroe's side.

This volume is adapted in episodes 4-8 in the second season of the anime. 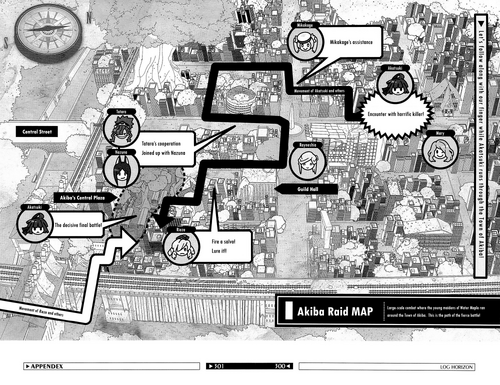 A mail-in popularity poll was released in a previous volume. Hara Kazuhiro created special illustrations for the top 5 winners: Akatsuki, Shiroe, Nyanta, Minori, and Rundelhaus. The images were incorporated into an illustration featured as a color spread in this volume, and wallpapers of each character were released on Mamare's now-defunct official site, mamare.net.

Retrieved from "https://log-horizon.fandom.com/wiki/Lost_Child_of_the_Dawn?oldid=29347"
Community content is available under CC-BY-SA unless otherwise noted.