The Gold of the Kunie

Pianississimo (often incorrectly spelled as Pianissimo) is an Elf Bard-Blacksmith in Silver Sword. She is a member of the third party in the Abyssal Shaft Raid Party. Her signature skill is Resonance Beat.

Pianississimo is rather short, being the third shortest member of the raid party after BologneseMaster and Vuorinen. She has red hair that is put into two braids behind her head, and has a hairband over her head.

She seems to be a rather shy person. At the same time, however, she is headstrong once she decides something and will stubbornly see it to the end.[2] She is sensitive about her name getting misspelled (perhaps as a nod to all the fans and Crunchyroll's anime subs who have mistakenly called her Pianissimo).

Along with Pororoca and another unnamed member, Pianississimo makes a cameo, firing arrows at a wyvern from behind Pororoca.[3] When William rejects his seat in the Round Table Alliance, she and the other members of Silver Sword, plus Tetora, follow him to Susukino.

After Silver Sword sets up base in Susukino and partakes in expeditions against the Giants that roam the Ezzo Empire, Pianississimo has become the mascot of the guild for the People of the Earth. Elderly Earthlings in particular love doting on her as if she were their grandchild.[2]

When Shiroe approaches William Massachusetts to recruit the guild to assist in the Abyssal Shaft raid, she is placed in the third party to buff the attack-focused party, and is seen standing next to Junzou. As the raid party travels to the Depths of Palm, she is seen with Odiso and William attacking some monsters.[4]

As the doors to Abyssal Shaft are about to open, she nervously states that she'll do her best and is reassured by Enkaatanto. While fighting some of the Orc Slimes, she is told to move back by Junzou as he and BologneseMaster attack. While fighting the first boss, she ends up getting knocked back during one of the blasts and is then seen by William's side with a Stun debuff. During one of the breaks, she can be seen repairing equipment.[5]

Like the rest of the raid party, she is killed when three raid bosses team up and revives at the dungeon's entrance. Depressed by the recent turn of events, she is seen laying on the ground, heartbroken and without the energy to get up. After wondering if the other raid zones were now like this, she tears up at the thought of being unable to continue raiding. When William gives his speech to motivate them, she props herself up on her elbow to look at him, and is surprised when he admits that they were his only friends. Like the others, she agrees to go back into Abyssal Shaft.[6]

After the events at Abyssal Shaft, it's obvious to everyone else that she's developed a crush on William.[2]

Pianississimo, like the rest of Silver Sword, participates in the defense against the Eternal Moths. After the Shibuya Raid Team successfully stops Taliktan, Pianississimo is among those watching Demiqas and Upashi as they wait for Upashi to wake up.[7]

Pianississimo uses a bow-and-arrow as her weapon, her bow also doubling up as a harp to accompany her Bard class.[8]

Sketch of Pianississimo in the Third Party, by Hara Kazuhiro 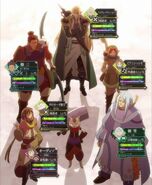 Retrieved from "https://log-horizon.fandom.com/wiki/Pianississimo?oldid=30970"
Community content is available under CC-BY-SA unless otherwise noted.