Yoshinaka is an Elf Samurai and the battle team leader for the Crescent Moon Alliance. He originates from the Honey Moon Logs manga and does not make an appearance in the anime.

Yoshinaka is a young man with long black hair that is let down. He wears traditional Japanese clothing, and wears his sword at his waist.

Yoshinaka enjoys playing chess and is said to be popular among the female members of the Crescent Moon Alliance. 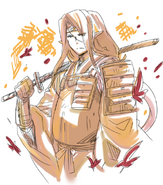 Add a photo to this gallery

Retrieved from "https://log-horizon.fandom.com/wiki/Yoshinaka?oldid=26480"
Community content is available under CC-BY-SA unless otherwise noted.